Duvall’s rich history of settlement began with the Snoqualmie Tribe whose members lived in this region year round for thousands of years. Using the Snoqualmie River as a primary travellingAs white settlers progressed westward in the mid to late 1800s, it wasn’t long before the area was “discovered.” Our city’s namesakes, Francis and James Duvall, found their paradise here and homesteaded in the 1870s. The original town was called Cherry Valley. It was located a half-mile from where Duvall currently resides, along the banks of the Snoqualmie River.

Until the early 1900s, river travel was Duvall’s link to commerce and trade with other towns and cities in the region. To meet the huge regional demand for building materials, logs from Duvall were transported up and down the river by steam-driven paddlewheel boats. Logging companies provided jobs, which also attracted cattle and dairy farmers. Soon railroad companies were interested in expansion to the area.

Prosperity brought growth and amenities such as sidewalks, streets, and a train depot. New businesses sprung up seemingly overnight and thrived with the booming economy. Along with a movie house, drug store, newspaper, and four hotels, Cherry Valley’s first school was built in 1879. The school itself was built with the wood of a single huge log from a local tree. Sadly, many of the buildings from these early businesses were eventually lost to new growth or to fire. However, a few of these historic buildings such as the Grange Hall and the old train depot still stand to this day.

The Dougherty Farmstead (a National Historic Landmark) and the famous “big rock” are other historic landmarks that are still enjoyed today. On January 6, 1913, the town of Duvall officially incorporated. In 1955, Ray Burhen bought the train depot and later donated it to the City of Duvall. It was subsequently moved to its present location at Depot Park near the Duvall Police Station. The last train whistle blew in 1973, ending an era, but leaving an indelible mark in Duvall’s history. The old train track is now used as a popular trail along the Snoqualmie Valley. Many simple Duvall milestones, such as getting water service or getting the first stop light, were exciting signs of growth. The population became more diverse over the years when artists and “back to the land” pioneers moved to the area in the 1970s, adding to the character of the town.

In 2013, the citizens of Duvall celebrated 100 years as an incorporated city, and marked the occasion by refurbishing Main Street. Today, Duvall is once again experiencing a surge of growth. A new generation of pioneers, such as young CSA farmers, as well as individuals working in high tech industries, are moving to the area attracted by the peaceful small town atmosphere and close proximity to large eastside cities. Perhaps the greatest common thread throughout the town’s history is the pride the inhabitants of Duvall feel for their beloved and vibrant community.

Times, they were a-changin’ in Duvall in the mid-1960s when the town became a destination for members of the so-called counter-culture. Out of the “hippie invasion” came one of the more memorable moments in Duvall history. April 28th, 1968 became a day of infamy when an upright piano was hoisted via helicopter hundreds of feet into the air. In front of the hundreds of curious spectators, the piano was dropped. It famously landed off target and onto soft ground with a great dull thud. The event was recreated during Duvall’s centennial celebration on August 3rd, 2013. This time the piano was lifted by a large crane and successfully smashed in front of hundreds of happy onlookers who joyfully ripped souvenirs from the demolished instrument.

Thank you to our next Meeting’s Speaker

Thank you to our next Meeting’s Raffle Donors

Would you like to receive updates of events and announcements happening in and around Duvall, WA by our Chamber Members?  Provide us your email address and we will send you email updates every Friday. 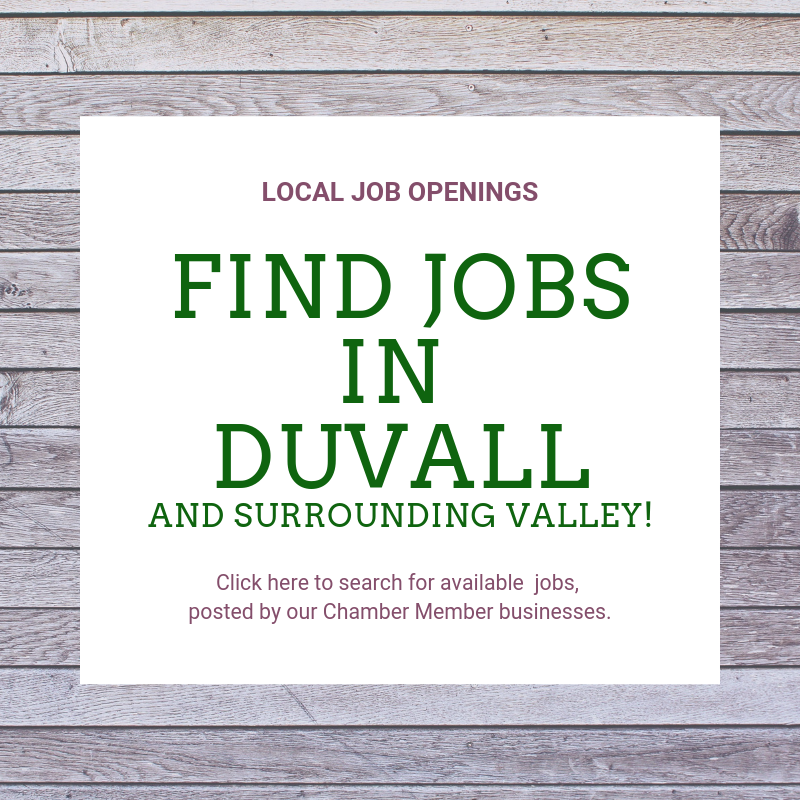